Okay last night I was having a down moment. I’m entitled….right? I was feeling kinda crappy about my life in general, and the last blog post was a result of that. However, I’m feeling better now. I watched Joyce Meyer this morning at 7:30 and she spoke about “WORRYING.” How timely was that???? I’m telling you God knows exactly what you need, and when you need it. Because last night, worry had begin to set in and I was buggin’ out. Thank you God for that intervention.

Now on to my newest obsession….

“Misadventures of Awkward Blackgirl.” I know I’m late but better late than never. Soooo I’m finally on board and I LOVE IT! Anyone who knows me knows I love to laugh, and I especially love that everyday type of humor that you can relate to. J the main character, is a girl who is stumbling through life’s awkward moments. The thoughts that play out in her head are absolutely hilarious! Everyone, man or woman can relate to J at some point in the series. She hates her co-workers, especially her boss Nina aka “Thirsty Bitch.” She has a best friend who is awkward too but, think it’s cool to act “black” for black guys and it’s a total epic FAIL! Out of the blue, her boyfriend dumped her for really no reason, and she writes violent raps about him…How awesome is that?

I love it and you will too.You are totally going to laugh your ASS OFF! ABG is relevant, current and cool. Finally there is a show where the main character is a black woman. Not only that………..SHE IS NATURAL! HA!!!! A two for one! Even better. 🙂 ROCK THAT TWA GUUURL!

Okay *Clears throat* Ummm….back to the topic at hand…..

Issa Rae (pictured below) is the creator of the web series ABG. According to kickstarter.com, ABG is Issa Rae’s third web series. It has been featured on several sites and publications, including Vibe, Clutch magazine, Huffington Post, The Root, Shadow & Act, AOL, and an upcoming issue of Essence magazine. Rae recently signed with UTA and 3 Arts Entertainment with plans to turn ABG from a web series into a cable half-hour comedy. In addition, she has two other web series, which include, “Dorm Diaries” and her award-winning series, “FLY GUYS present the F Word.” 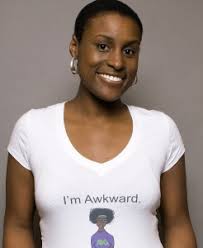 I definitely can’t wait to see more of “J” in her awkward world writing more violent raps LOL. Much love and success to Issa and all of her future endeavors!