Welcome to my little corner of the world where I share my journey, creative musings and offer bites of inspiration. What is Love.Shan.Glam?
It is:
.Love-Offering my gifts to the world and doing all things with love
.Shan-The whimsical, everyday girl who loves to laugh and live in the moment
.Glam-The girly-girl in me who adores style and beauty

Thank you for visiting and following!

Posted on May 23, 2012September 23, 2015 by Love.Shan.Glam
Here are a few of some popular 90’s fashion trends that may take you back down memory lane. Some were cool and some were……well…..not so cool.

HBCU Sweatshirts: I didn’t have one of these sweatshirts but I definitely wanted one. This is a fashion trend I hope comes back! Baggy Clothes: Love Love LOVE TLC and their style. I was ALL over this one as much as I could.  This trend was right up my alley because I like being comfortable. Part of it also was the tomboy in me coming out.

Slouch Socks: I was definitely on this one. It was just the cool thing to do! lol

The Bustier: Too skanky and I never had the body for it. Think Halle Berry in “Strictly Business” and Jade.

Mood Rings: Never got into it. *shandashrug*

The Raiders Snap backs: An iconic piece of hip-hop history.

The Chain Wallet: How did this become cool? LOL

Skidz: These used to be super popular when I was in high school, especially with the guys. I didn’t really care for them much. They look like glorified pajama pants.

Lugz: I used to think these were so dope! HA! (Where IS Keith Murray btw?)

Benetton: Another one of my faves back in the day. But their ads were uh….controversial to say the least. In high school I had the Benetton Colors perfume, and wore it out!

Stripped Shirts: This fad got real old for me. Everyone was wearing them! A definite 90’s fashion staple item.

Yeah…Levi’s and their marketing lol.

KK was one of the first and paved the way for others like Fubu and Roc-a-Wear. But when they started selling knock off Karl Kani at the flea market…it was officially over.

Bike Caps: I had one and I was fly…So what? 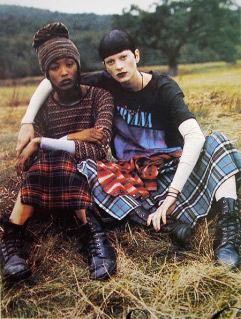 You can’t mention 90’s fashion without talking about Grunge. The plaid shirts, ripped jeans, thermal shirts, long hair etc. I swear every white kid went grunge. Think Pearl Jam and Nirvana. You can thank Seattle’s 90’s music scene for this one. OK I did have have a pair of black Birkenstocks (sue me).

Nautica was definitely up there with Tommy Hillfiger and Polo…even though most folks wearing it had never been on a sail boat a day in their life.
I used to like the way the cologne smelled on men 🙂

Speaking of fragrance…Remember the CK1 commercials?? UGH! But this best-selling unisex fragrance will always be around. Wallabees: Uhmmm yeah…Think these were mostly popular on the East Coast. *shrugs*

I rocked several even during my college years. If you didn’t have one, you weren’t cool. Period. Don’t know what the kids are rocking now. 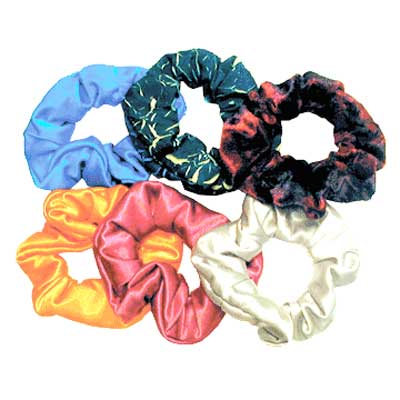 Scrunchies: I had tons of them. If they weren’t in your hair they were around your wrist. Some girls had more Scrunchie than they had hair, but that’s a different post.

Yeah…Had my fair share of butterfly clips! If you stepped on one bare footed, it hurt like hell! lol

In the late 90’s all the free-spirited wanna-be chicks were rocking bantu/hair knots.

The 90’s fashion was about the large logos splattered on the clothes. Tommy Hilfiger was not different. I think the only TH I ever owned was a small purse. TH was to patriotic looking for me. After the Oprah Show scandal/rumor, the brand and his career was never really the same. Umbro Shorts: Never had any and didn’t want any. I remember mostly the girls who played soccer in high school wore these. *shrugs* Bandanas: They come in every color in the rainbow. Some were wearing them bedazzled with stones. Bandanas were a popular head piece, more than something you wore around your neck. When my hair was long and straight I wore a navy blue one trying to get my Aaliyah on.
LAST BUT NOT LEAST… Nylon Warm-Up Suits: These were dope…but they made so much noise when you move, you can hear somebody coming a mile away. Reebok, Adidas, Asics, Fila all had them but Nike cornered the market on the nylon warm-ups. You really didn’t work out in them just walked around and looked cool. And you could just wear the jacket. I like the big zip up pockets, you could hide a bag of chips in your pocket and eat them in class lol.
Peace & Blessings,
NaturalistaGlam

Inspirer. Lover of beautiful people, places and things. Offering food for thought with a side of snark, and telling my truths. View all posts by Love.Shan.Glam