And if you don’t know who she is? I will need you to remove yourself from under that rock now.
Emeli Sande is an artist/songwriter from the UK and she has taken over the UK music charts with her debut album, “Our Vision of Events”, released February 2012. She is making a big splash in the US also and her hit single, Next to Me and it’s on fire. You may remember her performing in the opening and closing ceremonies of the 2012 Olympics. I so love her voice!
But back to the hair… 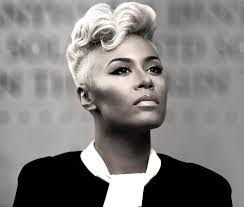 (Photo Credit: thelovelyemelisande.tumblr.com)
Yasss! Miss Sande is giving me major life with her blonde tapered cut. I A D O R E it! I may be slightly biased because I’ve been considering (and still is) cutting my hair in a tapered cut. Emeli’s short cut is carefree, easy and fierce. Though I doubt I’d ever bleach my hair blonde, she is workin’ it…messy or styled, it works for her.